COMBAT JACKS is my new creator-owned project and is being treated as a ONE SHOT sci fi/horror comic in the vein of the old EC WEIRD SCIENCE FANTASY meets VAULT of HORROR books from the 50’s. Jack O’ Lanterns have always been considered creepy and crafting scary ones with a knife has always been a Halloween mission. Creating a story about living, monsterous Jack O’ Lanterns indigenous to another planet seemed like a natural place to go for a fun sci fi/ horror project.

The synopsis of the story started with the idea of a marine squad with high tech weaponry sent to investigate the disappearance of prison terraformers on the new found planet Maia. Because of the abundance of pumpkin-like vegetation on Maia, the planet was deemed habitable by the human race because of the oyxgen the plants produced. And there lies the rub… A Venus Fly trap, if you will.

Heres an excerpt: “(Corporal) DAD (aka Dorothy) hears him and alerts the rest of us, “…CONTACT! 5 O‘CLOCK, 20 METERS” Before we know what has happened…they’re on us. Large gangly, misshapen demonic-looking Jack O’Lanterns with spindly, vine-shaped bodies smacking at us from all different directions. Somehow, these innate looking pumpkins awoke from the pumpkin patch and were now demons from Hell and far worse then any Nightmare Before Christmas I could ever imagine.” 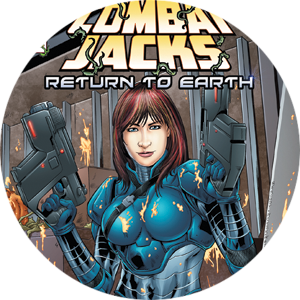